As an accomplished acoustic and electric bassist, John Adams is one of the Southwest’s most versatile and in-demand musicians. Adams holds Bachelor and Master of Music degrees from the University of North Texas, where for ten years he was the jazz bass instructor. He is also active as producer, arranger, composer, music contractor, lecturer and workshop clinician. Since 2005 he has led the “Special Edition Band,” a high-energy, eclectic party/dance band.

Through his bassistonline.com website, John provides bass parts for recording clients of every musical genre ranging across the US, as well as internationally. He has backed and/or recorded for a wide array of artists from vocalists Mel Torme, Rosemary Clooney, Phil Driscoll, and Wayne Watson, to jazz artists such as Woody Herman, Randy Brecker, Marvin Stamm, Joe McBride, Bobby Lyle, Carl Fontana, Chet Baker, Clark Terry, Dave Liebman, and others. His broad musical background has also included symphonic and pit/show work.

Through his independent Congruent Music label, Adams has released eight highly acclaimed and widely varied CD projects, including “John and Mark’s Excellent Rock Adventure,” (2012), and which is not only enjoyable to listen to, but also includes a unique instructional/play-along component. The seven jazz CD projects have received radio airplay on over 160 stations nationwide, and have been prominently featured on various online radio formats. Each of these projects presents the listener with unique originals, stunning arrangements, and vaious instrumentation combinations, each with a compelling musical rapport.

or the first eighteen years of my life I do not remember analyzing or thinking consciously about my world-view. I enjoyed many aspects of the life I had, and am grateful for the rich experiences I was given as a child, and growing into young-adulthood – from musical and multi-talented parents, to some sports, to camps, to family trips, to exploring in Nature. Among the most formative experiences I had, was the two years my family spent in Uganda in eastern Africa. I was aged 10 – 12 and still have vivid memories of the people, places, sounds, sights, food, and drama of life in another culture. We were even there when Idi Amin took over the country. On our way home we also had the incredible experience of a six week trip through Asia that included stops in India, the Himalayas, Hong Kong, New Guinea, and Japan. I came away from it with some above average skills in soccer (for an American!) and a keen awareness of, among other things, the fragility and variety of life, and above all, a type of gratitude. I knew that I was glad to be back in the States (I think I had soft ice cream within the first 20 minutes!), but I also knew that I would never quite see anything exactly the same way or therefore, take it for granted.I grew up in a church-going family, and even most of my extended family seemed to take religion as an integral part of life. My Dad’s father, W. W. Adams was a brilliant Bible teacher and seminary professor. I only knew him as a good-natured old man with a dry wit (as my grandmother had too) and a sensitive heart. In my early teen years, though I questioned things, including the existence of God, I eventually concluded two things:
1) that there is a God who made everything; even a particular issue of National Geographic about space assisted that conclusion, instead of the perhaps more expected opposite one; and
2) that religion and church were for old folks and “weak people” (as if I were not!).

I spent high school delving as deeply as I could into the activities and friends I enjoyed, and headed for the goals I could see, especially my growing musical ones. I spent as little time as possible in church, but dutifully went most times when asked. However, though I would probably have been viewed as a good and happy kid (my Mom said later that sometimes she would hear me laughing in my sleep), I felt a certain type of nagging loneliness.

While I was still in my first semester in college at North Texas State (now U.N.T.), amidst the whirl and inspiration of that musical environment, I was struck by something totally unexpected. I was continually exposed to and befriended by fellow music students for whom God seemed to be a reality and a relationship, not a distant Creator entity. I was alternately put off and intrigued by this and remember wondering how they could “know” what God was telling them.

As numerous events and encounters occurred during that semester and and into the early spring, one crucial transition took place inside me. I never went to church with these “religious” music students, but the concepts of sin, and salvation from its penalty which had been presented to me in various ways, and which sounded so foreign to me at first, began to sink in. In one crashing set of days, when I was falsely accused of doing something illegal, I realized that everyone around me either reacted by reaffirming me “we know you would never do anything like that,” or by winking and slapping me on the back because I had “gotten away with it.”

I knew that both reactions were insufficient. One of the main reasons for this is that I suddenly began to grapple with other times when I had gotten away with doing wrong things. That is when the idea of looking to Jesus to be my Savior first took on a new light, and I began to want what these “religious” friends of mine had. What then started as a general change of direction for my heart and mind, became a full-fledged change of life which has continued to this day. I view it primarily as something that happened to me, which then changed the path I put my feet to (conscious effort).

Students of Christian theology, as I subsequently became, would readily affirm that there is an absolute and legal sense in which those reactions to sin issues, or any other human reaction to it, would be insufficient. One of the interesting factors about this for me is that, as you may have noticed in my description of the process of my “conversion,” given above, is that I did not come to Christ based on burning intellectual or philosophical issues, and yet once in the door, so to speak, have found the room to be full of plenty of meat for the mind as well as the soul.

If I have any hobbies, other than making as much time as I can for my family, they are: 1) the study of theology, because there is no end to the study of an infinite and perfect Being and what He does and has done; 2) the study of history, because in light of Scripture, people and events matter, and things are “headed somewhere” and are not just on a meaningless and endless cycle; and 3) to lesser degree, the study of philosophy, because, for similar reasons, people and the questions they have also matter, and I believe, sufficient answers to them are possible.

Professionally and circumstantially I had several ups and downs during the decade or so right after university, but one of the biggest positives, was having the chance to meet, and eventually marry a great lady named Jean. We built our life together on the same foundation that we were each building on individually. In time came a daughter, Rebekah (born 1993) and son, Andrew (born 1996), and they are marvelous.

A certain aspect of Forrest Gump’s “box of Chocolates” philosophy holds true and in a press of challenging events that began at Christmas time of 2003, my wonderful wife and companion contracted cancer and then died in August of 2004. As would be expected, all of the ensuing events and transitions have been very tough for me. However, over these years, I have also had ample opportunity to be reminded of how everyone faces grief and challenges in various amounts and times. Many people have truly helped my family, and I have still experienced much joy and many joyous times. Frequently I still run into small doses of grief and the loss I feel of that great lady, and the burden I am carrying, but I feel as if I have never shed one lonely tear. In equal or greater doses than the grief, I am often overwhelmed by God’s goodness and the greatness of what He has done for us.

Often I am asked how Rebekah and Andrew are doing. Though it has not been without a hitch, they are doing great because of God’s grace, and the foundation that they had, and I am so honored to be their Dad.

Frequently I have been asked, sometimes hesitatingly, if there has been any noticeable impact from this loss and transition on my music. It has affected my schedule, and my priorities, but that I can even still be working as an artist, in the field that I love and am gifted at, with great musicians who are also friends, has been a great source of healing for me. I have been told that there may be an extra dose of passion and intensity in my playing, but the greatest thing for me is related to something I experienced early in my journey as a Christian. I became acquainted with the idea of God moving through and in a sense empowering people to be His vessels as they use their gifts. As a music student, I began to try to apply this idea my development. I quickly discovered that this is not a seamless or effortless process, but I can vividly recall the first time someone that been listening to me at a performance (at about age 20) rendered the compliment that, it sounded like I was “really starting to get a voice.” I was deeply touched by this because the thought immediately occurred to me that it may not be “my voice” that he was hearing, but God’s. I still run into my limitations in one form or another on a regular and daily basis, but I am also keenly aware that at times, and maybe even more often than before, there is a voice singing through my music, and as He passes by I am blessed beyond words.

For an expanded look at John Adams’ services and experience as a studio musician, session bassist, arranger, and music producer visit:  bassistonline.com 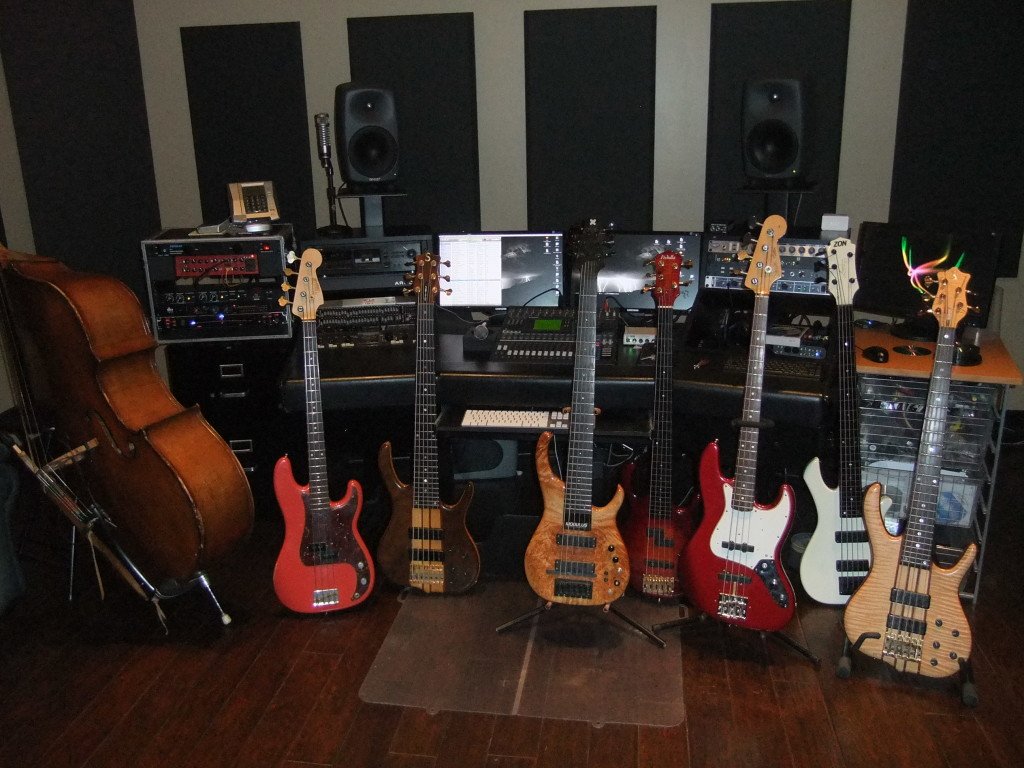